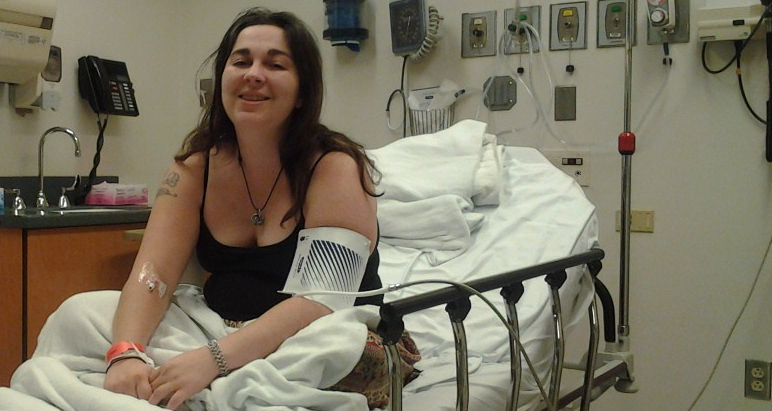 I always get those symptoms on medications… “in rare cases.”  They don’t feel so rare. I also seem to win those undesirable lotteries with diagnoses.

I have been getting headaches lately. Searing pain behind my eye, sometimes pushing on the base of my skull. They scare me. For most people, headaches are something you take an OTC medication for and they dull or disappear. For many, migraines are a severe problem, light and sound sensitive, lasting days, the pain barely touched by prescription medication. For me, well, until I can get them identified, these pains are terrifying.

In 2015, I got what we assumed was a migraine. It lasted weeks. After the first few days, I went to the doctor who sent me to the Emergency Room because my blood pressure was skyrocketed – stroke risk levels. After hours and passing out in the hospital with IV fluids, my blood pressure decreased down to “normal” levels. The pain was still there but it wasn’t AS bad, so they sent me home. I made a neurology appointment as directed. The waiting times are horrible. Five, six weeks out – after my second trip to the doctor, who again sent me to the ER – my neurologist finally could see me.

We talked for a short while about the pain I had been experiencing non-stop for about 45 days, and all the pretty things I was and was not seeing. I couldn’t look at a screen, couldn’t see outdoors… I had looked up “auras” weeks earlier because I knew sometimes people with migraines had vision issues. By now, I had every ocular aura I knew of – dancing lights, halos, I couldn’t see through the bright white spots and greyed out circles. The doctor got his little light and magnifier and checked my eyes. He asked if anyone else had and I said no, asking why. He said, staring into the back of my eyes, “There’s nothing back here that resembles human anatomy.” I didn’t know if I should laugh or cry.

He wrote some things down, explained it all to my fiance because I was a mess, and off we went for a third trip to the hospital. This time was different though, my neurologist may have had a strange way of letting me know what was wrong, but he did make sure that we had everything we needed. He even left his cell phone number to call and let him know that I was being taken care of as it would be after hours by the time I made it to the hospital. I owe him more than any copay could cover.

This time I was fully admitted. The diagnosis: Pseudotumor Cerebri (PTC), or Idiopathic Intracranial Hypertension. I had high brain pressure. It took so long to diagnose that I had lost a third of the vision in my left eye and it was months before it returned. In fact, it took so long that we thought it might be permanent. PTC creates swelling of your optic nerve. It caused fluid to enter my eye that shouldn’t as well as some minor hemorrhaging inside.

PTC is a “1 in 50,000 people” kind of thing, so please if you notice symptoms like what I described above, don’t panic but get it checked anyway to be safe. I know sometimes we read something and end up with psychosomatic issues. This isn’t common at all. It is, however, potentially recurring. Especially when one comes off the medication that’s been controlling it. I will be making an appointment with my regular doctor, and then the others if I need to. My headaches don’t feel the same as they did back then but I think my fear is making things worse. Fear sucks.

This is where my mind has been lately, well that and dealing with the fact that my mood stabilizer level is low. When I pull myself together a bit more, we’ll talk about doctors. More specifically, the benefits of being assertive. If you have any questions, please feel free to comment or contact me. About anything really. Eventually, I want to be able to help people through my blog, not just myself, so if you have issues or situations you want me to try to address, let me know.